Ever thought about redemption!!!!

Every one of us have either bullied the weak or been a victim to bullying. We might forget about the consequences of this activity but recently I came across this movie that depicts the true emotion involved at both the ends. Yes, today I would like to write about a movie that I watched recently and had a huge impact on me. Let’s get on the ride….

Check out the trailer below.

Now, for some basic information about the movie!

For the Plot, let’s keep it simple.

We got our two main characters:

Ishida bullies Nishimiya and destroys her school life. In spite of her disability, Nishimiya tries to interact with everyone in her class via her notebook. But Ishida’s bullying destroys her friendship with other kids. When got caught Ishida’s friends turn on him. Taking all the blame, now Ishida becomes a victim to the bullying. Eventually, he discovers Nishimiya’s notebook and her good actions. Now, in high school, being treated as a outcast Ishida meets Nishimiya and apologizes for his action. He returns her notebook and tries to mend his relationship with Nishimiya.

What goes around, comes around

Ishida bullied Nishimiya. And for his actions, he became a victim and was bullied by others. In High school, he avoided anybody’s contact and became an outcast. However, through redemption he was able to achieve forgiveness for his actions. Although, it was possible with the help of his family, friends and Nishimiya.

Now, let us focus of few outstanding characters in the movie:

Outstanding Characters in the movie: One of the main Protagonist. Ishida’s character development was beautifully designed. Initially, when you see him in his elementary school time, Ishida stands out as this gangsta leader and a very notorious boy who played with his fellow classmates. After getting caught and realizing his mistakes, Ishida completely shuts down his communication with anybody except Nishimiya. Since he wanted to redeem himself from his wrong actions against Nishimiya.

I loved it when Ishida sees his classmates in high school, there’s X mark on their face which represents that he avoids any kind of contact or communication with them.

Realization is a huge process and it requires patience. I believe Ishida’s character was able to achieve it because he decided to meet Nishimiya again and wanted to apologize properly for his bullying. And when he was able to gain the forgiveness, he accepted himself and all of the X marks he had seen in other’s face began to fall down. This depicts that he was finally forgive for his mistakes and he is ready to start afresh.

Ishida’s personality can be seen within most of us in real world. We do mistakes or hurt people but do we really feel guilty about it? Are we ready to apologize? What could have happened to Ishida if he hadn’t met Nishimiya and ask for forgiveness?

Simple, Ishida would have lived in regret and might committed suicide which he avoided in the beginning of the movie. 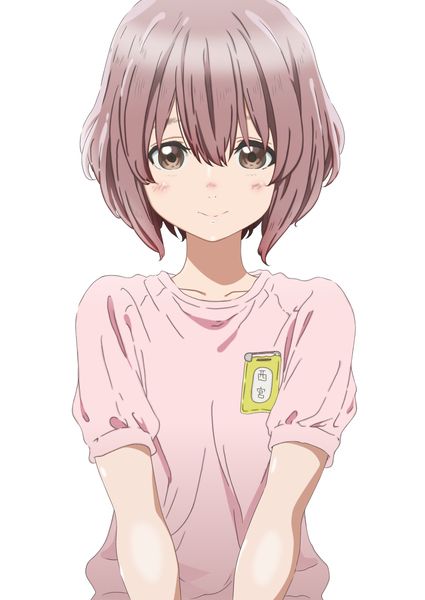 Nishimiya was a surprising character. She has a strong personality and a very kind heart. When Ishida destroys her friendship with Miyoko Sahara, Nishimiya handled it very mature. Also, when everyone else bullied Ishida and wrote names on his desk, it was Nishimiya who tried to erase it. Nishimiya’s character was bold when she attempts to be friend with her classmates. Even when Ishida and his friends bullied her she was kind.

Although, I feel that she was always in a shell which she was afraid to come out. Hesitant, feared and regret were mostly suited her. She took the blame herself for everything that happened to Ishida. Later when Nishimiya tried to commit suicide, Ishida saves her.

I believe that meeting Ishida again helped Nishimiya discover her feelings for him also, her emotions became clear and more open. I could say she was able to come out of her shell slowly. The voice actor Saori Hayami did an extraordinary work with her voice perfectly matching Nishimiya’s character. It was an out of world performance from the voice actor. Finally, I just wish that Ishida could realize her feelings and accept her. Although a lot of fanfics and Doujinshi may exist, I hope that maybe some day we get to see the sequel of this movie. 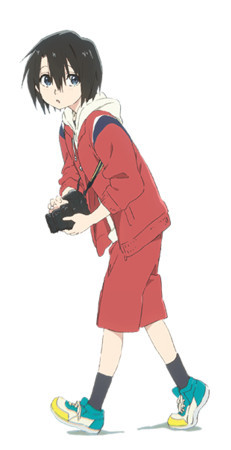 For those of you who haven’t yet watched the movie, let me say this. Yuzuru would be a striking character for the audience. The protective younger sister of Nishimiya who even went to the extreme to reveal herself as “Nishimiya’s boyfriend” when she met Ishida for the first time. A reckless, tomboy with a camera always hanging around her neck. Yuzuru appeared to be a very passionate photographer in this movie whilst protecting her elder sister. She understands Nishimiya and only want good things for her. She acted as a great wing man for Nishimiya and Ishida. Although Ishida still haven’t figured out her confession.

Yuzuru’s character development was progressive. Besides being a protective younger sister, I thought Yuzuru lost her life and I wished her to take care of herself first. It came true by the sister’s grandmother who advised Yuzuru to take her life more seriously and take care of herself first. We see in the later part of the movie that Yuzuru decided to attend school again.

Alright the reason I believe this guy is outstanding because. He took the effort to actually be in friends with Ishida and helped him in overcoming his state of avoidance. Because Ishida avoids any kind of contact with anyone in his class, this guy becomes the first person who’s X mark was removed. This guy is actually a defender of Ishida and helps him in his relationship with nishimiya. This guy would be the perfect “first step” for Ishida in his redemption. #bestfriendsforlife #truefriendsalwayscareforyou
Even though his appearance and importance could be noted as minor, his influence on Ishida plays a huge role in this movie. I felt happy that Ishida was able to find a true good friend in high school. #againbestfriendsforlifeforever #friendsforever

Shout out to the mom’s of Nishimiya and Ishida –

Although I did thought that Nishimiya’s mother was a bit harsh. I couldn’t deny the fact that any mother would be harsh when they find out their child being bullied. Ishida’s mother was kindest in this movie. #momlove #mompower #loveyoumoms

Ishida’s mother was patient and always forgiving. She made Ishida realize his mistake of trying to commit suicide. Mom’s are always rocking, isn’t it?

Well, both the mother’s receive a special shout out for their awesome mom powers.

When there’s a movie with disabled character, music has a most important role of conveying the correct message to the audience. I felt the music was perfect and suited the flow of movie and it’s characters.

Kensuke Ushio did an awesome job in background score. In this movie, it won’t be like a background score but rather, the music speaks to you. It tells you the dialog and you would like it in that way. The flow of music was intense as per the scenes.

My favorite part of background score is the beginning of the movie when Ishida tried to commit suicide and the immediate transition to the 80’s rock song for the elementary school Ishida’s intro. That was perfecto!!!

Make sure to LISTEN to the sweet sounds in this movie.

With that being said, I could talk more about the movie. But i am going to stop. This article is to tell you that how great a movie is this and how awesome the characters are.

Bullying is still around in this world. So make sure to see this movie and understand what is happening around the characters. Please share it with your friends.

Finally, i revealed about the most important fact about this movie and that is Bullies. But after watching this movie, I felt to understand my own voice and accepted myself. I learned to listen to other’s and understand them respectively. It isn’t always about bullying, but also to do a mistake, you must also know to apologize and take prior action in accepting the fact that what you did was wrong. Redemption is a choice. It can’t become a “must” factor. But if we realize our mistake and choose to redeem oneself, it will take you to another level and help you become a better human being.

Make sure to check this awesome movie and enjoy the experience of discovering yourself further.

To read the original Manga version, click on the link below:

That’s it for now.

Until next time with another topic…..BYe bYE