I don’t know where to start.

Alright, this is one of the recent anime that I watched and felt really good. Indeed, the anime was dark and isn’t really suited for everyone. However, if you’re able to continue watching it, I swear you will feel good at the END and would expect more.

The anime was released last year, 2018. It brought out a lot of opinion from the anime fan community. Within after the release of few episodes, some were claiming it as ‘shouldn’t watch if you’re weak-hearted’ or ‘very dark anime’ and so on. I agree. This is a dark fantasy anime show.

Before voicing out my opinion, let us learn a few things about Goblin Slayer –

Wow, a lot of Manga adaptation. I think so because after I finished the series, I wanted more and thus looked for Manga and found out that there’s a prequel. However, I did recently found out the second adaptation. Alright, now that we got our information about who? let’s move on to the plot.

Let me keep it simple. It’s the world of adventurers and there are a lot of people who are aiming to become an adventurer. So, you get the quest, you go to help people and slay some monsters and then receive rewards. Got the system?

Goblin Slayer anime series focuses on the single man who goes on quests that allows him to kill Goblins. Now, this guy is profoundly known as “GOBLIN SLAYER” because he only accepts the quests involving goblins. If it isn’t a goblin, this guy doesn’t bother to even listen to the quest.

As revealed in the title, the series follows the Goblin Slayer on his journey in killing all those Goblins.

The show starts with the young priestess who wants to accompany the adventurers on their journey and help solving them the quest. She did get to join a group of young adventurers who are still inexperienced. For their first mission, they got defeated by the Goblins and all the women got raped except for Priestess. Just when she was about to get raped, we see goblin slayer making his presence and killing those creatures to death. After getting rescued by the goblin slayer, the priestess faces the reality of goblins and thus joins goblin slayer in his adventure.

Let’s talk about the worst thing in the world –GOBLINS 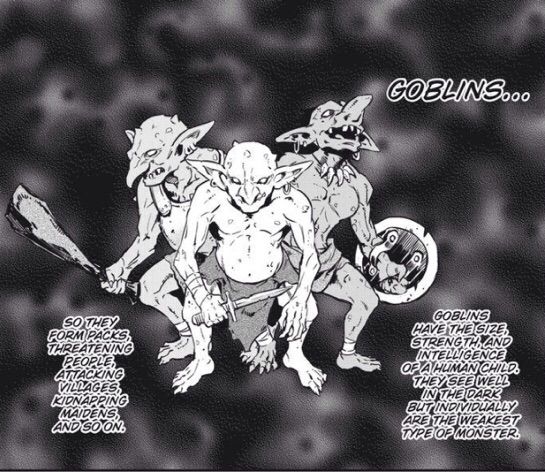 The reason why the show got a lot of opinions were about the fact the ‘Goblins raping women and torturing them sexually by stripping down their clothes, hanging/ tieing then naked and finally using them as their toy’. Fans were not able to see the scenes where the females get stripped down and raped by the Goblins. Yes, it is creepy and unsatisfying to watch.

You guys, even I hated it. I’m sure all of us did. However, it shouldn’t be the reason to bash the anime.

So, Goblins, these filthy creatures lurking underground and traveling in packs killing people, destroying villages and raping the ladies. They are not smart at first but they can learn soon enough to prove you wrong. These creatures lay traps to capture and kill people. They can sense the humans by their smell. Finally, they have these damn huge Goblin champions and Goblin Lord, that are huge in size and are used to fighting.

Oh and also Goblins can deceive you by acting all sad and stuff. But don’t fall for it. That is just an act to escape from humans. If you believe and let them escape, you will be the next one to die.

So let’s talk about our hero – GOBLIN SLAYER

I did mention in the title as “MYSTERIOUS HERO“. Well, here you go – 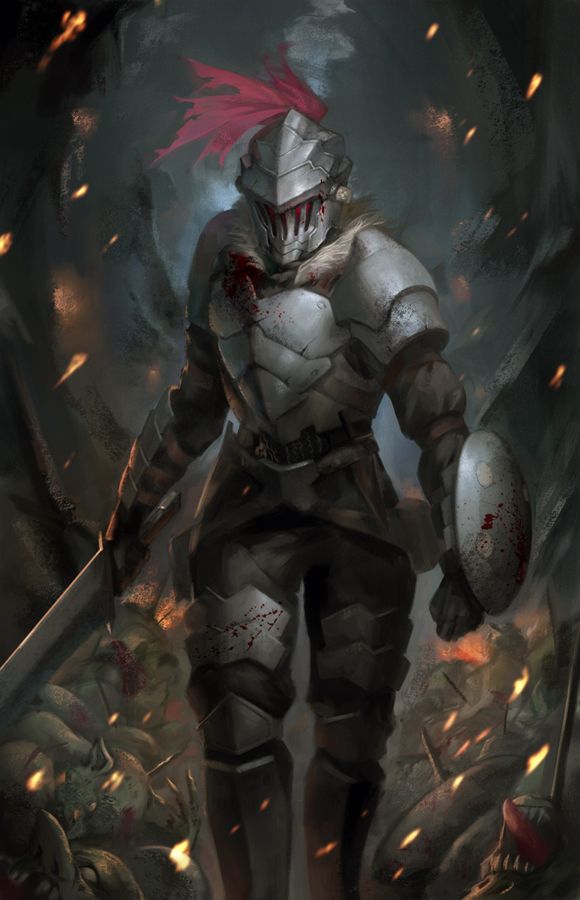 That’s all. You get to see him like this till the end of the series. God knows what he looks like?

From his handsome face!!! But, we the audience never got to see his face.

That was me feeling the pain. However, here’s few things about Goblin Slayer –

So, the here’s a meme to give you guys a picture of him: 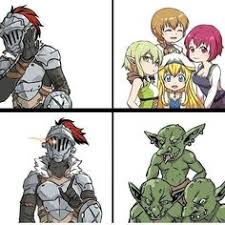 That’s him, literally. Guys, don’t hate him though. He works hard for the peace even without him realizing it.

A stoic guy, a man of few words, doesn’t work in groups, let alone goes on quest slaying the goblins. But during one of his mission, he saves a young priestess who later accompanies him on his journey to kill the goblins. 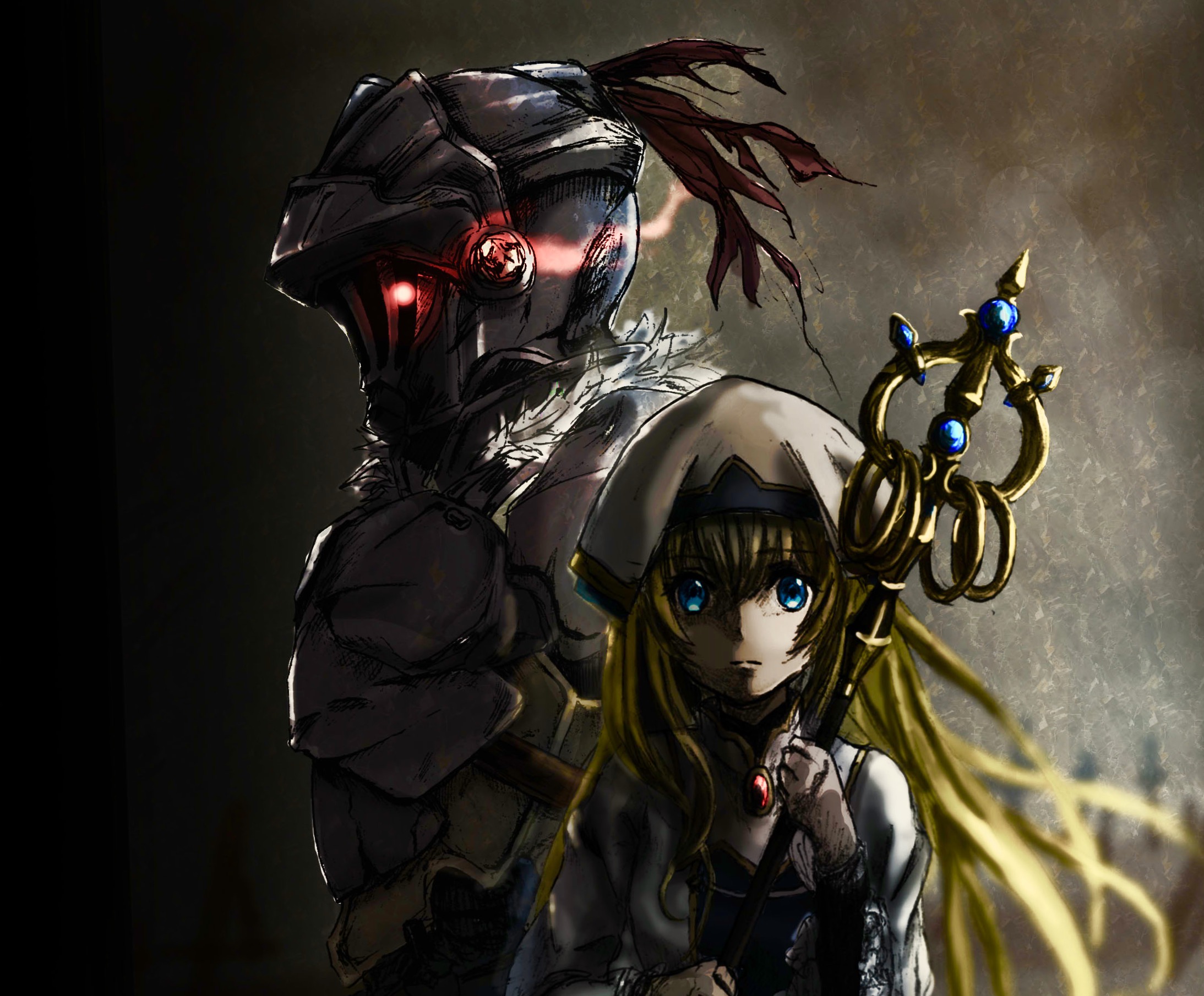 Yep, that’s the priestess. She’s cute guys. And I hardcore ship her with our Goblin Slayer. Because she is the first person to ever join Goblin Slayer on his mission. And he too accepted her. Fast forward another few episodes, you see the gang with Lizardman, dwarf and an elf trying to work with Goblin Slayer. And they did. Hurray!!! 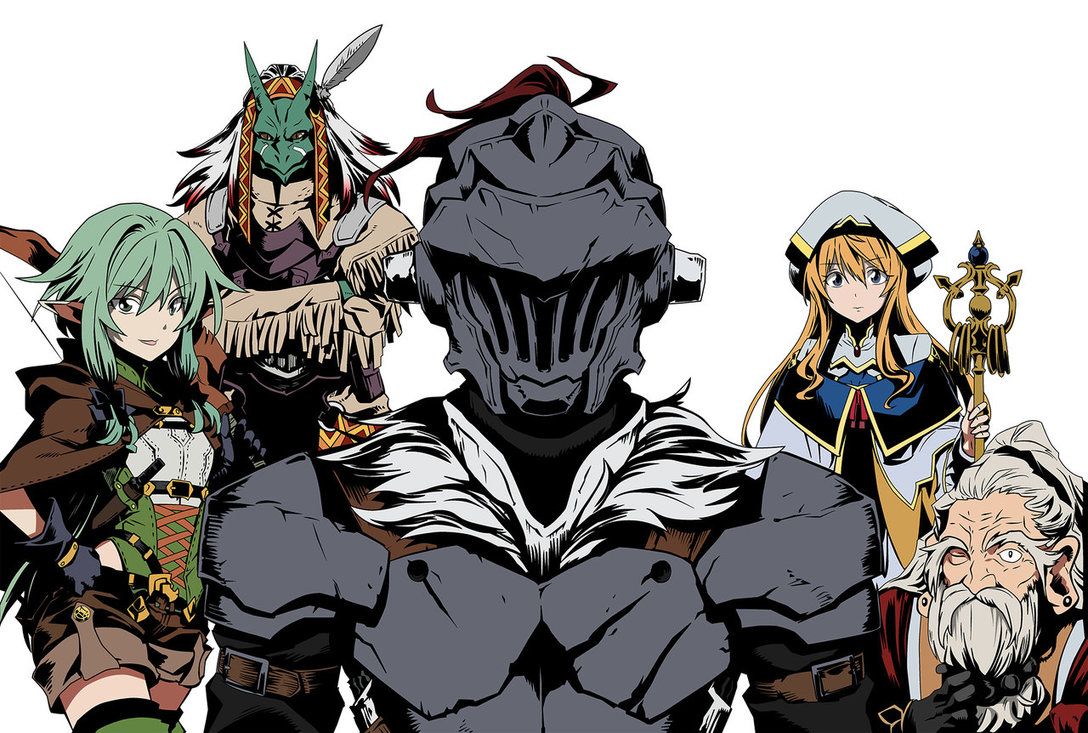 That’s the team. I loved how Goblin Slayer went from being a one-man team to having a goblin slaying group.

The reason why Goblin Slayer is dedicated to killing Goblins-

Everyone around Goblin Slayer doesn’t get why the guy is obsessed with Goblins. In fact, they even mock at him for only accepting quests with the goblins. It is later found out that when Goblin Slayer was young, his village got attacked by the goblins and no adventurer had come to save them. In addition to it, Goblin Slayer’s sister got raped and toyed in front of him, which result in him becoming the Goblin Slayer. This also the reason why he protects his childhood friend who lives outside the village on a farm. Every day he stops by to check if there had been any movements near the farm. Checking to make sure that the goblins stay away from that place.

About the series, a few words –

Overall, the series is action-packed with a good storyline. A lot of people didn’t like it when the anime showed Goblins raping women and stuff related to it. However, just like I said if you get past that and keep watching you’re going to love this show. Honestly, I don’t think it that goring and brutal. So, give it a shot.

The anime really made its presence in 2018 and had gained a lot of popularity all around the world.

I enjoyed the show and actually binge-watched it. I am expecting for a season 2 and also for Manga updates.

Things I hate in this show –

Not really much but I do have one thing that I hate in this show is the exaggeration of female body parts. Yes, the anime representation of females with huge breasts is not really a plus point for the series. The series showcased few women with really outrageous breasts which kind of annoyed the overall experience. Maybe it was like that in the Manga itself. However, that’s one drawback of this series that I find.

Other than that, the storyline is simple and great. The animation style is awesome. The music…

The music is really good. Moreover, the opening will kill you. Mili’s Rightfully, exactly captured the Gobline Slayer series essence and the song perfectly suited for the show. Here’s the anime opening-

and here’s to the official music video of the song –

Guys, the song is really awesome and I’m obsessed with it on repeat mode.

Overall, a great anime show and definitely worth watching it. Go for it, if you haven’t really watched the show.

Here’s the link to watch the series: